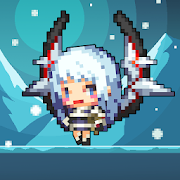 [Season 2: Inheritance Update]
Classic retro RPG that will bring back your childhood memories!
Crusaders Quest Season 2 begins now.
▶Our beautiful retro pixel art will take you back in time!
Immerse yourself in the cute pixel graphics and flashy action gameplay of more than 700 different 8-bit Heroes!
▶Enter the vast world of Crusaders Quest flush with captivating stories that will engage you to no end!
Defend the land of Hasla and its Goddesses from the forces trying to bring it to ruin! Some may even find hidden stories about the Haslan Heroes from the library!
▶Exciting Skill Block Play!
Enjoy the simple, yet strategic match-3 skill block controls. Turn the tides of battle with the Goddesses’ skills in critical moments, as well as figure out the infinite synergies between the hundreds of Heroes!
▶Break the limits of hero growth through Inheriting and Inlaying.
Overcome Challenges to get Secret Books to tap the ancient power sleeping in your heroes. Rediscover the ancient blacksmithing method, Inlaying, to further upgrade your weapons!
▶Conquer PVP! Ancient Dungeons! And Even World Boss Raids!
Conduct realtime PVP in the Colosseum to find out who is really the strongest in all of Hasla!
Visit Ancient Dungeons filled with rewards and World Boss Raids where you take down massive monsters with 6 heroes!